Social Media Analytics in Finance with Oli Wilkinson of Knowsis

Oli Wilkinson had an interview with our Growth Hacker Simon Burns to discuss the inception of his financial technology startup Knowsis following the 2008 crash, the growing influence of social media in financial markets and the process of building a machine learning tool to dissect social media “noise”. Oli co-founded and is the CEO of London based financial instrument based social media called Knowsis. Knowsis has built a service directed at institutional clients to help them navigate the noisy, inflammatory andÂ unstructured data flows from social media. Oli’s commentary was compelling, candid and comprehensive. Here’s our interview with Oli Wilkinson:

Simon Burns: Oli, you’re an inspiring innovator in the financial technology space. Knowsis has built itself into a pioneer in social media analytics for financial market securities. Can you take through us through how you got started in the space and maybe evolve that into what you’re doing now with Knowsis.

Oli Wilkinson: Yeah, absolutely. Knowsis started 3 or so years ago. At the time, I was an investment bank trader on a trading floor in London. It was around the time when news stories were breaking over Twitter before they were hitting the traditional news wires. I think the first time I really noticed it, was a story to do with an airliner, Air France. The story broke first on Twitter that there was some kind of trouble. The share price reacted half an hour later as it hit the typical Bloomberg news wire. But at the time, traders were saying that it is really interesting that the financial services world, being on the cutting edge of the information curve, was behind. 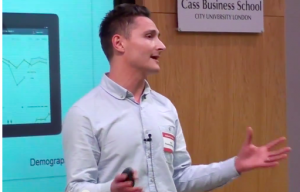 Oli Wilkinson is the CEO and Co-Founder of innovative Social Media Sentiment and Signal provider for Financial Markets, Knowsis.

The financial world, particularly at that time, was just ignoring one of the biggest shifts in information flow for a generation. That shift was a migration from tradition news wires to real time social media for financial information.

So at the time, we did an internal presentation to the bank. But as always, when you’re in a big organization, a big bank, it’s very slow moving. Very hard to get people to commit funds to new initiatives.

During the financial crisis, the banks started letting people go and they closed down our entire department. I decided to set up a business in this space and to try and see if there was a way of finding value in the unstructured world of social media. To deliver something of value to the wider trading community. That is how we started Knowsis.
Simon Burns: Great story Oli. Can you give an overview of the technology Knowsis is using for social media financial analytics to provide insights for traders?

Oli Wilkinson: For financial services analytics to get the best out of the wide world of social media, you have to have systems that can a) identify financial relevance of conversation, and b) have your own proprietary sensing and analysis algorithms as well. Generic ones don’t and we realized that is where our value could be. We started to heavily verticalize into a space, so for example you want your algorithms to really, truly understand what an abandoned baby is in chart. So Knowsis being able to factor in all these machine learning variables into our systems, so they can learn and evolve over time. As to how people talk about financially relevant conversation is our key focus.

Knowsis systems are very good at identifying things from trading chat/slang, all the way through to, high level and analytical conversation around fundamentals of companies or macro issues.

Simon Burns: That’s very compelling. How has Knowsis changed the way that the initial Air France news might be taken by markets today? What would it look like today if Knowsis was where you see it ideally?

Oli Wilkinson: One thing social media has been very good at showing us a voice to the world. So there is a chance that there are times when you will get important information in the public domain. Often it comes in just ahead of reporters. You have to go through various checks and balances to make sure you have verified stories and there are inherent risks to acting on “trade by tweet” strategies.

The Associated Press Flash Crash was a good example where it got hacked into by some relatively dumb algos that you probably got hold of that tweet and decided to act accordingly. You can’t trade social media like an RSS feed, purely because it does give a voice to the world, and because of that, there are inherent risks.

With our algos, we spend a lot of our work in statistical significance. It’s actually based on taking a bit more of a longer term in some ways. And that is to look at aggregates of behaviors over the longer time periods and projecting them to following days as to where the system will predict asset prices. At the EOD, we’re able to see where it sits in our significance threshold, what the chances are of this asset going up or down, lots of data on an “all other things being equal” basis. It is less about speed of delivering information, more about really trying to catch the underlying behavior or trends which can help everybody, whether you’re a high-frequency trader or not.

If you get a signal that gives you an idea of the direction potentially in that current day, or you are doing high-frequency trading, that can still be very valuable. But also for the guys who might take a slightly longer term view as well. And that’s where we’re seeing a lot of really interesting work.

Simon Burns: For example, say we look at that end of day score or sentiment value you were talking about there. I would imagine for your average Dow Jones or FTSE company, you might have anywhere from a few hundred to a few thousand tweets on that name/ticker. Your algorithm would be running through what extent of analysis on that? Would it be looking at particular words, looking at the positivity or negativity of those words, favorites on tweets? What’s really going into the calculations of that score and what’s more value in terms of significance the net scoring system?

Oli Wilkinson: What is really interesting about social media like Twitter is for the first time ever, you are able to measure engagement to stories. The news piece in itself almost becomes secondary to the reaction. So a good example is if, I don’t know, Morgan Stanley comes out with an upgrade on Apple, for example, that’s the viewing in the old way, in the old world, that was that you’d rather agree with that view or not, binary. What we can do now is see did people agree with that or not. This is where the power of algorithms and social media are able to tap into it correctly and really comes into its own.

Simon Burns: A few weeks ago I was speaking with a financial blogger and one of the points he was making is that he believes, sort of cynically, that old world of the Yahoo finance message board with inflammatory posts has moved in a large part to Twitter. How does your algorithm to deal with those issues and is there a good process to dealing with that?

It’s one of the things that we worked on. We’ve built processes through those different angles. But one of them is a spam filter which looks at how the user interacts with others, including the language they use. We also even have a manual blacklist as well if our algorithms miss it.

Oli Wilkinson: It picked it up as everyone else’s did. It wasn’t really a good news story. This is kind of where the focus of what we do is very different. Ultimately, you could look at things in two ways. Polarity of conversation, and also social activity would be the second thing. The fact is it did move the markets. People wanted to be alerted to what was being done and why it was moving the markets and what happened. It happens all the time. You get a billboard screen, your headlights come out. You see the algorithms suddenly react and spike the security price, and then once you understand the true meaning, once somebody actually read the text behind the headline, the market calmed down a bit. Where our work is different is that though we have an API that works in real-time, we always say to people, be very careful about real-time news in sort of social metrics purely because it isn’t verified.

Ultimately, one of the big things that we do, because it’s crowd-based, a few people talking about something shouldn’t move the dial, which is what 99.9% are spam falls into anyway. When people going to try and push something and it dies out pretty quickly in our experience. Because we try and look at things where there’s a decent level of conversation on any given day, it shouldn’t make a difference.

Simon Burns:Last week, I did an interview with Paul Hawtin of Derwent Capital Markets, the first ever Twitter Sentiment Hedge Fund. Very interesting guy. In terms of the future for hedge funds based on this sort of data, do you think there is a bright future?

Oli Wilkinson: I think that hedge funds, by definition, are always looking for an edge. There are all kinds of crazy sources of data. This gives them something to go out and compile, which is more information. I think things like the AP crash show anybody in the hedge fund industry must pay attention to it because social media is not going away. And in the last six months, there have been well-documented cases where it effects markets.

In terms of the future and how widely it will be used, it’s like anything. When I was in an investment bank, you had some hedge fund guys who didn’t care about fundamentals. Just didn’t give a damn about it and just wanted charts and market indicators solely. I think it’s the same thing with this kind of market data is that there’s a space for it. And it’s not going to be for everybody. But those that learn how to use it correctly and feel comfortable will make a lot of money out of it. But it is not going to be for everyone the same way as trading of charts we want it the same way.

Simon Burns: Do you feel like London is a in a hotbed of the financial technology world and do you have any take on how your geographical location is influencing what is happening in the space?

Oli Wilkinson: I think financial services are very important to London. It has been for the last hundreds of years. But obviously it being one of the biggest global financial centers in the last decade or so. There is more appetite for people looking at space in U.K. to try and make some FinTech projects work.

So I think that been a driver of innovation in London; which many are saying is a good thing. They are saying that instead of sitting behind Bloomberg screens, we’re trying to create something.

Simon Burns: Thank you for your time, you’re certainly a part of the growing, exciting space with social media analytics for markets. We’ll be watching Knowsis carefully and so will our users.

Oli Wilkinson: Thank you very much.