Blake Woodard had a chat with our Growth Hacker Simon Burns on his start in algorithmic trading with Excel following an injury that left him motionless for days, his crowd psychology based market strategy and opinion on HFT. Blake is the Managing Director and Portfolio Manager at RLF Capital Management. Blake will be teaching at the Center for Entrepreneurship and Technology at UC Berkeley in the Fall. Blake is an insightful, candid and well spoken commentator and we thoroughly enjoyed having Blake Woodard at our San Francisco office. Here’s our interview with Blake Woodard:

Simon Burns: Well thank you for joining us Blake. Blake Woodard is the portfolio manage for R.L.F. Capital Management. Blake, tell us the story how long you’ve been running the fund, how did you get involved?

Blake Woodard: I’ve been running the fund for two years. I’ve been trading for a long time before that, basically throughout college then after I graduated, I went traveling sort of a series of post graduation trips. During that time I was trading and also writing down theory. So I started working on quantifying my trading during those trips since a lot of my strategies were math based, based on technical analysis. I put more work into these quant trading models after I got back again and it’s something where I had a little bit of success and it’s really interesting how having a little bit of success can really make you more willing to put more work into it. As it happens two weeks after that first breakthrough, I got assaulted and I actually broke my eye socket and my cheekbone so I got reconstructive surgery . After that I was recovering on my dad’s house, I couldn’t eat. I couldn’t talk. I couldn’t move around that much. For a period of time I was really just glued to my computer working on models and it just started to work. I was essentially working on a strategy that would switch and adapt to regime changes that I was already trading manually. 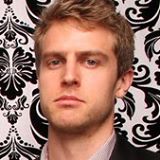 Blake Woodard is the Portfolio Manager for RLP Capital Management. The Berkeley, CA based firm is invested in a crowd psychology based market strategy and also invests in real estate as well as private equity.

Simon Burns: Can you elaborate by what types of regime change analysis you were doing? The term has come to mean many things in the quant space.

Blake Woodard: For me the overall definition of regime change is just a change in how markets function. Although not a  structural change can be the shift from trading through a broker on the floor to electronic trading, this is differentiating factor. A great example of a regime change would be a long term bull market which peaks out and turns into a bear market. If you can anticipate those regime changes, you can switch back and forth between quant models that are more successful than one versus other models that are more successful than others. That type of strategy was my main focus.

Blake Woodard: I was programming in really simple ways that I feel like a dinosaur explaining. I was programming in basic languages and Excel and I started more and more using Excel because I really like the fact that my system was not a black box. When I say black box I’m not using it in the term of how we normally use it. I mean more of how when you you plug all historical data into your strategy and then you back testing everything, you can see every cell and action as you break it down. Which is really good for figuring out the logic behind the model.

Obviously the problem with curve fitting is a huge issue in trading. I’m always thinking “Are we doing something that isnt going to be replicated in the future?”.

Simon Burns: Interesting, there are lots of programming languages used in algorithmic trading from C#, to Python, C++ and some statistical languages. Obviously Excel is sort of in a different category, the dinosaur category maybe, what would you recommend to a new quant in the same spot you were when you started?

Blake Woodard: Well I hired an analyst recently from the HFT world. He left his HFT job and we started programming in C++ because he was more of a programmer turned finance guy versus I was a finance guy turned semi programmer. He was doing it in C++ for me but the problem with C++ is its hard to audit your systems so you get this output. And its really dangerous in that you can get complacent curve fitting or cheating in some other way. But yeah the modern programming languages are ideal to learn.

Simon Burns: So you said more recently to look into market psychology in looking for regime changes and terms of bringing in new data and building new models or just building new strategies. Take us through how you’re doing that.

Blake Woodard: Right now we’ve been looking at a number of factors on a given scene to see where people are getting too exuberant or getting too depressed about something . Look to see a kind of super exponential growth curve or super exponential sell off. There are ways to quantify bubbles but I think that you can just sell from rudimentary sentiment and going out there in the street and hearing about real estate bubbles.

I was in gold and silver for a lot of 2010 and 2011 and it was a really lucky bet but it absolutely paid off. It was right around the peak of gold or at least the recent peak of gold. It was funny, we were thinking of gold as a short candidate and then I happened to be at the supermarket and I got into an argument with an employee in the supermarket about the future of gold. He was saying that it was going up forever because gold is the only true currency and he had made a bunch of money.

We looked at the situation logically, early movers are already in, institutions are in and now retails are piling in. So you get a final spike up because everybody drives the price up in that final buying period which correlates with the most disillusionment about the infallibility of an asset. That to me is a really big example that a peak has formed.

Simon Burns: I’m assuming you saw the AP market tweet crash flashback a few months ago where there was a fake tweet from the AP and it caused a crash. I’m interested to hear from your take.  Because there’s certainly one side of the market that said in the aftermath, that the crash happened very quickly and showed how efficient markets correctly prices the markets extraordinarily quickly. While the other side said noted that if humans had made all decisions, the crash may not have even happened. What is your take?

Blake Woodard:With regards to flash crashes, it’s not necessarily bad if you think about the concepts behind markets and assets. The problem is if you have 10% stop losses in place and the market calls the orders only to revert to previous levels. Obviously in that case, you just lost 10% of your portfolio and all the gains in the recovery. You’ll be sitting saying “What the hell just happened”.

So even with a proper hedge, you can get destroyed in flash crashes if you have those stops in place. In terms of a really holistic view of markets,  if you are smart and recognize that a flash crash is occurring is clearly a time to jump in and gobble up cheap assets. So,  I wouldn’t say I’m “pro flash crashes” but they are rapid selling for silly reasons, whether it’s a news article or some other reason. I think it’s hard to call an effect like that good or bad generally.

Simon Burns: So that’s a great segue into high frequency trading. What do you think about regulating the market? Would it remove flash crashes? Remove some of the erratic market behavior?

Blake Woodard:I don’t mind high frequency trading in of itself. In general, it’s not really going to hurt you that much.

What I don’t like is cold stuffing because then people essentially hop in line in front of you and then pull out their bid if they don’t actually want to buy. The best solution Ive heard if you want to get rid of that is charging a tax to trade, like some kind of token pass and even smaller tax on every request for bidding information. Even a tiny, tiny tax on placing bids and placing asks which would be immaterial to 99% of retail investors would work well.

Simon Burns:Okay, so we started the conversation talking about market regimes and change in regimes. Clearly you’re devoting a lot of time to researching market tops and crowd psychology strategy, what are some regime changes you are following closely?

Blake Woodard:Well I’ll take this question more broadly and when we’re talking about the democratizing quant trading, what you’re doing at QuantConnect. It’s really great because in general it increases competition which is good. Calling tops, keeping markets in check, removing excess power from institutions. It’s a structural change to the markets without a regulated change by a governing body, it’s a change brought on by democratize technology and that’s exciting.

Simon Burns: Well let’s end it there, thank you for your time Blake it’s been great!